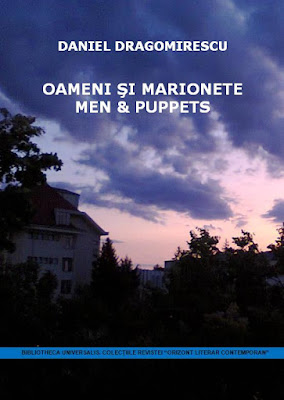 Life from an inside perspective

Every so often a book comes along that makes you feel good to be alive. This is one of those. The best books broaden and deepen our sense and understanding of the world. I was going to go on and write ‘and add destinations to our bucket list.’ But no, these best books have already taken us there; we feel we know the places, the people, with our hearts. The place? North-eastern and central Romania.

I feel privileged to have a copy of Men and Puppets, by Daniel Dragomirescu. The book is a collection of reminiscences, autobiographical snippets, and is well worth the time and effort in getting hold of. Elegantly presented, and on the whole, well translated, this is part of a series of books by "Orizont literar contemporan". All are dual-language, and by writers from many countries.

Daniel Dragomirescu lives in the north-eastern Vaslui region of Romania. He writes of life from the inside; the autobiographical angle gives a necessarily limited view of the times, limited to one’s interests, activities, and to the villages and small towns of the time.

Big Politics, the State, the Eastern Bloc, are not words or concepts of everyday life. He does come up against them (A Meeting with Cerberus); they are also, on another level, a basic part of that life. Yet they are everywhere, especially for the generations from before the War, his parents’ and grandparent’s generations. It is they who have to watch what they say.

We see the unquestioned fate of pre-War bourgeois families, in their disgrace (The Sandals' Story). All is accepted as a part of life. The State restrictions have their circumnavigations, but they can be suddenly enforced due to the arbitrariness and fickleness of officials (At the Nadovari Camp). But they are not ‘officials’, they are people one’s father might know from school, from ‘before’ - their fickleness is the fickleness of everybody, everywhere.

We read also a first-hand account of a devastating earthquake hitting Bucharest. People at their most vulnerable; we read also the hidden threats by people. One of my favourite stories, Marilena, has its own ways of handling the hopes, passions and lost opportunities that are always with us. And this is one of the heartening aspects of the stories: how love, hope of love, arranged love that could grow into itself, are always a part of our lives, our world. These things are instantly recognisable, and they go to the core of who we are.

In the new Romania religion once again plays a major role. This may surprise us, and yet, as Fish Borscht makes clear (to my mind the only story that doesn’t gel), religion never really went away. Even this story is full of the riches of the lived life, the times, the mind-set of the period. The role of religion is a curious one; there are many expostulations to God, in the stories. These are post-Communist. I wonder do they read as a little self-consciously apparent?

Are the stories part of the new movement to re-establish a continuous Romanian identity, that had just been interrupted for a time?

What becomes clear through the reading is the seamless identity we all wear and are part of: here we all are, with all our hopes, woes and lapses of understanding. The details may differ, but the responses are so very recognisable. And because we can identify, our hearts are also in these stories, as we respond to the same things they did.

The last chapter, The Typewriter, brings the whole book into focus. I had begun to wonder at the book's title, Men and Puppets. Well, here it was, spelled out. I wrote, above, how the fickleness of officials is the fickleness of man; there is the fickleness of officials themselves, though. I also wrote of the State being just the background to people's lives. So it was, but as they took on more responsibility, became adults, the State became a major interference in their lives. Take Ceausescu's decree that all typewriters should be officially registered. It smacks of a Nazi-era dictat, and it is little surprise we find a militia chief admiring Nazi-era tactics. After the Fall of Ceausescu, the militia excuse themselves as puppets of the regime. Officials, militia, puppets, anything rather than just ordinary people.

Daniel Dragomirescu has a masterful technique. The use of the motif of his meeting with a stray dog in a cemetery, in A Meeting with Cerebrus,becomes the key for opening up the whole part of his life at that period. It is this mastery that is the secret, it works behind the scenes to bring the chapters to life. A most enjoyable book, full of the fears, hopes, loves and doubts of our lives.

Michael Murray (1952, northern England) came to higher education later. He sat his BA degree in 1982, studying Humanities (History, Literature, Philosophy). Later he attained MA in Writing, from Manchester Metropolitan University. He has had poetry published with English magazines Magma, Rialto, The Journal, Stand and Pennine Platform. Online he has published with Antiphon, HandJob magazine, Ol’Chanty, and Zoomorphic Magazine. Also, he has had works performed on Artslab, RedShift Radio. He was a main contributor to Parameters, a literary journal. He gathered together the arts reviews, essays, poetry reviews, published there, polished and updated them, and published them in book form, as Parameters, with Knives Forks and Spoons Press, 2010. In 2015 he published a semi-academic study of the use of chiasmus and rings as overall organising structures in texts, as Gifts of Rings and Gold, on Amazon kindle. Recent book reviews have been published in translation in Romania: CLH 60/2017, in "Obiectiv de Vaslui" (a regional paper) and in "Nord literar" (a literary journal from Baia Mare city,  Transylvania). He is currently engaged on a novel based on the Gilgamesh tale, set in contemporary times.