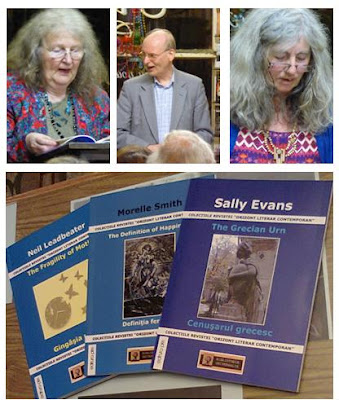 Sally Evans, Neil Leadbeater and Morelle Smith launched their books in the Bibliotheca Universalis bilingual series at Callander on Friday 4 September. The occasion was the annual Callander Poetry Weekend which attracted an enthusiastic audience of writers and poets from the length and breadth of the United Kingdom. (One writer came from as far north as Elgin in Scotland and another from as far south as Devon in England).

Neil Leadbeater gave a brief introduction to the launch. He spoke of his own association with Contemporary Literary Horizon and gave a brief history of the origin and development of the magazine from what was once a Romanian journal into what is now a multicultural journal. He also spoke about the ambitious project with Bibliotheca Universalis and EdituraPim and mentioned the names of all the Scottish poets who had had work published in the series to date. He paid tribute to the energy and enthusiasm of all involved in the project. Neil Leadbeater, Sally Evans and Morelle Smith read several poems from their collections and all the readings were well-received.

The Callander Poetry Weekend is an annual event hosted by Sally Evans, who edits Poetry Scotland and is a poet in her own right, and her husband Ian King who, between them, run a bookshop in Callander. In the beginning, it was a one-day event but after a couple of years, it grew into a whole weekend and it is now celebrating its fifteenth year. Events take place in the bookshop itself and also in the Kirk Hall. One year, a poetry reading even took place on a boat on Loch Katrine.  There’s usually some Gaelic and Scots at the Callander Poetry Weekend and poetry in other languages is also welcomed.  Music is also featured as a welcome interlude between readings or as an accompaniment to a reading.

There is always a varied programme of events on offer and this year was no exception. In addition to the BU launch, there were launches by other presses, readings by a group of poets from Chester (England), a talk and discussion on the making of film poems and a translation of some of the works of John Clare into Doric.  Colin Will entertained the audience by playing saxophone, Rita Bradd played the clàrsach – a type of Celtic harp- and there was also music provided by a group from the Edinburgh Mandolin and Guitar Orchestra. 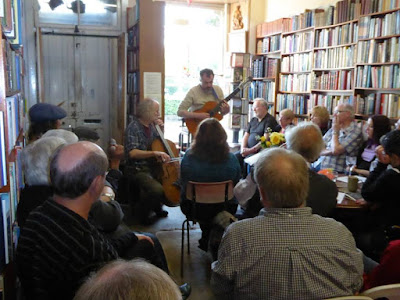